Syria: Escaping War with the Bible Sewn Into A Blouse 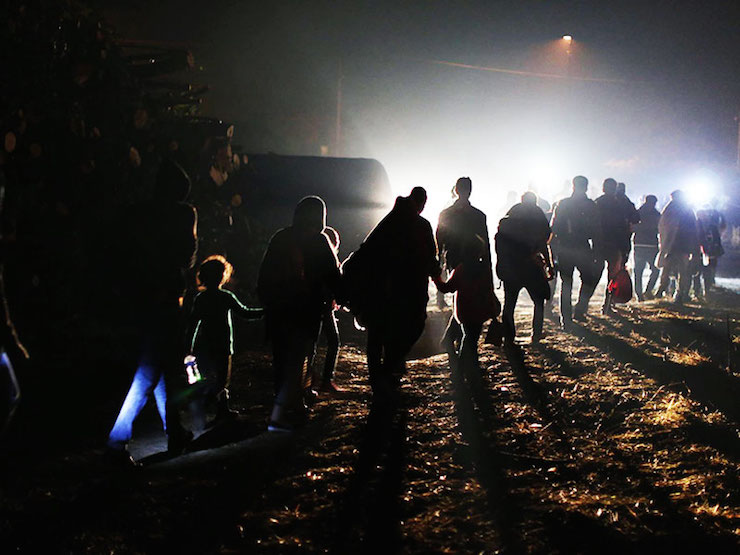 Shoushan Chaghalanian, a Syrian woman of Christian faith, decided to leave her country, heading for Armenia with her family. A dangerous and dramatic journey followed – as recounted by Shoushan.

“Making the decision is the most important step; from that moment on one does not think of anything other than the organisation of the escape, in order to run away from war, the risk of being killed in a terrorist attack, or seeing your children and your loved ones dying. The thought of leaving everything and running away becomes an obsession, but at the same time a project, a light that indicates the direction towards life. You pray to God, and ask Him to help you to make it through the long journey towards a peaceful land.

“So on 4th September 2013, at 8 in the evening, my husband and my son Vartan and I left the Christian neighbourhood of al-Wusta in Qamishli. We did not carry any luggage except a bag containing a bottle of water. We kept all the money left in our pockets, and I carried the Bible leaves and a small edition of the prayers of St. Gregory of Narek, sewn into my blouse. It was a warm evening of our last summer in the Syrian nightmare.”

Despite all that she went through, Shoushan Chaghalanian, 48, smiles. Our Southworld group met her in her new Middle Eastern pastry shop, in the centre of Yerevan, Armenia’s capital. Her husband and son, who are proud of their new business and the new challenge, were at the counter serving the customers, while listening to Shoushan retrace their long journey from Qaamishli in north-eastern Syria to Armenia, the land of their people, via Turkey.

The ancient Qamishli is home to 180,000 inhabitants, and it is considered the capital of the Christians in Syria. This place is a mosaic of the ancient Eastern Churches – the Orthodox, Syriac, Assyrian, and the Catholic Church. All of them are united in the name of the faith in Christ. The Kurds control large areas of the city while the government forces of President Assad retain strongholds in the southern suburbs. People do not experience here the daily horror of the war in Aleppo, but rather a never-ending skirmish between the Kurds and the government army, and the extremists.

The Syrians who have rebuilt their lives in Armenia, in the South Caucasus, number about 15,000. Their lives have been devastated by the war in their country. Many refugees have opened cafes or small restaurants in Armenia, thanks to a government programme that has welcomed them, granted citizenship, and provided vocational training. Basically Armenians offered their Syrian brothers, who are the descendants of the Armenians that survived the 1915 massacre perpetrated by the Turks, hope for the future. One century ago, they found refuge in Syria and now, as in a biblical story, they are on the run again.

On June 24th, Pope Francis visited this country, which officially declared itself Christian 1,700 years ago. Armenia, in fact, is the only country in the world where Christians make up 98% of the population, and this is particularly relevant in these difficult times for Christians in the East.

Addressing the refugees, the Pope said: “I think of all those forced to leave everything behind, particularly in the Middle East, where so many of our brothers and sisters suffer violence and persecution on account of hatred and interminable conflicts. Those conflicts are fuelled by the proliferation of weapons and by the arms trade, by the temptation to resort to force and by lack of respect for the human person – especially for the weak, the poor, and those who seek only a dignified life”.

Shoushan continues to tell of her epic journey, the passage across the border which cost $5,000. There were 60 refugees that night, walking in absolute silence. Then, the shooting, when the Turkish soldiers heard some rustling beyond the barbed wire. “We stayed motionless, lying on the ground, for a time that seemed endless to me,” Shoushan recalls.

And then the travel in a small van along a ‘painful’ route: Gazientep, Nusaybin, Urfa. The names of these cities evoke tragic stories that took place a century ago, when thousands of Armenians were forced to leave those places. Caravans of desperate and exhausted people who, after hundreds of kilometres, died in the desert of Mesopotamia, many of them whispering the healing prayers from the prayer book of St. Gregory of Narek. The same prayers that Shoushan carried sewn into her blouse during her escape.

Her family, or rather, what was left of it, was from Urfa. Her great-grandmother was 7 years old when she was able to save herself by hiding in a henhouse, from which she saw her loved ones getting killed. Remembering her great-grandmother’s story always moves Shoushan; she tilts her head, and as tears run down her face, she recites Gregory Narek’s prayers by heart.

PreviousGhana: The Ancestors’ Stool
NextRadio Zapata, Mexico: Weaving Communities from the Heart of the Mountain