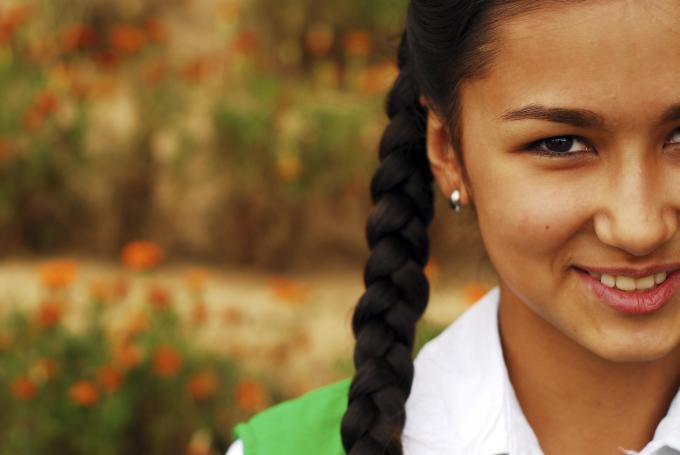 The Catholic Church, a small presence in a land which is rich with tradition.

Turkmenistan is a landlocked country in Central Asia. It lies along the arduous ancient route of the Silk Road, which connects Beijing to the Mediterranean Sea and has been the most important channel of transit of both ideas and commerce between China and the Western world, for centuries.

According to popular etymologies as old as the 11th century, the word “Turkmen” derives from the Persian term “tir” which is pronounced by Turks “tür” (arrow) and “kàmon”, which is pronounced “keman”(bow). Persians allegedly called them by this name to point out that they were expert archers but with the passage of time, the Turkic peoples have forgotten the meaning of the word. They confuse the suffix ‘man’ – later to become ‘men’ – with the Turkish word meaning “I”. In most of the Turkic languages, in fact, Turkmen means “I am Turkish”).

Geographically, Turkmenistan covers an area of approximately 500,000 sq. km and borders Kazakhstan and Uzbekistan to the north-east, with Afghanistan to the south-east, Iran to the south and the Caspian Sea to the west. The S-shaped Kopet-Dag and Paropamisos mountain range marks the country’s borders, while in the east there are canyons and the lush mountains of the Kugitang Nature Reserve. The Karakum Desert is at the heart of the country, covering about 80% of the territory with an area of about 40,000 sq.km creating stunning scenery.

The name ‘Karakum’, which means ‘black sand’ in Turkic languages, is emblematic because sand is the natural element characterizing this area. The sand of the Karakum desert contains a characteristic salt, which is the result of the evaporation of the sea and river waters of this region, and the remnants of mineral and alkaline deposits.

Just like most of the neighboring countries, Turkmenistan is a land of ancient nomadic traditions. Turkmen society has kept its cultural traits alive through the use of traditional costumes, in some cases emblems of the social status of a person, through carpet and jewel handicrafts, as well as through activities such as horse breeding, hunting and traditional dances. Poems and folk songs were passed down orally before being written down in the twentieth century.

Turkmenistan has a population of nearly 5,000,000. To date, 85% of the population are Turkmen, 5% Uzbeks and 4% Russians. The ethnic homogeneity is partly due to the migratory flows of Russian and Uzbek minorities that occurred in the aftermath of the independence from the USSR in 1991.

In the early nineties, some Catholic priests arrived in Kazakhstan, Central Asia. Having learnt that some priests were in Central Asia, a group of Catholics of German origin, living in Turkmenbashy on the Caspian Sea, wrote to Pope John Paul II asking him for the presence of the priests in their area. The Pope forwarded the letter to the nuncio of Almaty in Kazakhstan, Archbishop Marian Oles, who then drove to Turkmenbashy and reported to the Vatican about his visit to the community.

The Pope thought it was time to open a Catholic mission in Turkmenistan. The nuncio himself was in charge of finding suitable missionaries to send to Turkmenbashy. The Oblates of Mary Immaculate accepted the assignment. Father Marcello Zago, the superior general, chose Father Andrzej Madej of the Polish province, who arrived in Ashgabat in 1997.

After eighteen years, the Church in Turkmenistan today consists of around 160 baptized, and just as many catechumens, people of different nationalities and different backgrounds. “From 1997 until March of 2010, the church in Turkmenistan was only an office of the Apostolic Nunciature, with diplomatic status”, says Father Andrzej, “but since March 2010 we were given legal recognition as the ‘Roman Catholic Church in Turkmenistan’ by the Ministry of Justice. The community of Ashgabat is obviously the largest, but there are Catholic families also in Turkmenbashy, Mary and in some other villages and towns”. The Catholic community in Turkmenistan is served by three priests.

Father Andrzej takes stock of his 18 years spent in Turkmenistan. “We have established a Roman Catholic Mission and despite the Catholics still being a small community, they are moving forward. Our priority is evangelization. We also have the ‘ministry for sacraments’. Our Mission tries to be a source of joy and a ray of light over the Karakum desert, spreading Jesus’ message of love, solidarity and hope, always in respect of the culture and traditions of this beautiful country”. Father Andrzej also underlines the different backgrounds and nationalities of the members of the Catholic community in Turkmenistan, “Every Sunday, faithful of 15 different nationalities celebrate the Eucharist – Egyptians, Filipinos, Poles, Italians, Americans, Koreans and so on.

At the same time, the Catholic community has established a good relationship with the people of Turkmenistan”. Father Andrzej concludes: “Even some vocations are springing up inside this small community. Our presence wants to be a sign. I can say that the life of the community of Ashgabat is different every day, every day there are new meeting opportunities. We practice forms of ecumenism and caring for others. The Good News fascinates and attracts people to Jesus. The Word of God has the power to bring together people who are scattered ‘like sheep without a shepherd’. Today, the Church is a community of reconciliation, which heals hearts and the wounds of separation, giving new peace and trust”.