Senegal: A Shelter For The Talibés 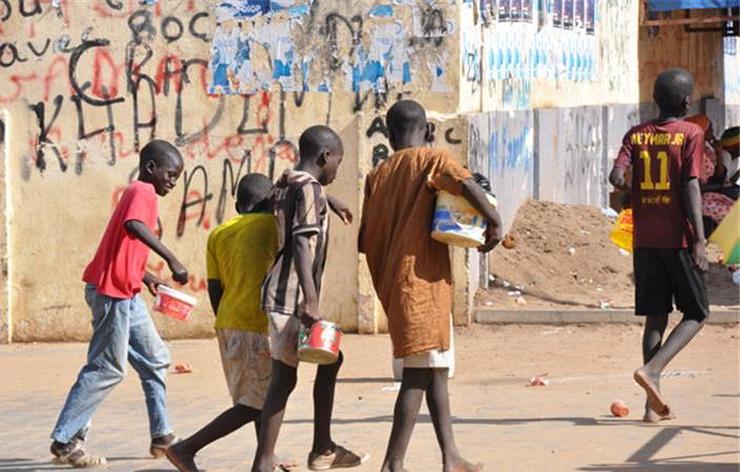 Issa Kouyaté is the Founder and Director of Maison de la Gare, a shelter in Senegal for hundreds of street children, often called talibés, to give them hope for a better future.

He is a familiar presence on the streets of Saint Louis, in northern Senegal and can be easily seen walking or cycling, particularly near the old, abandoned railway station. Tall, with dreadlocks, the 37-years old activist has devoted himself to the talibés, the young beggar students of the koranic schools, often aged no more than 5 or 6, since 2006. “It’s a tough task”, he admits, with estimates that there are no less than 15,000 young beggars in the whole city of Saint Louis.

Young beggars are relatively easy to spot around the city, usually hanging around in crossing points such as street junctions, petrol pumps or markets, such as the market in front of the old railway station. Barefoot and often wearing just a worn-out t-shirt and shorts, they hold in their hands an empty tin box or a little plastic bag. They ask passers-by for money which they could use for food, clothes or other daily expenses. Their teacher, or marabout, is not supposed to provide these things, even if the children have been entrusted to him by families living hundreds of miles away.

Begging, in theory, should be practiced only a few hours a day, just to satisfy basic needs, while most of their time should be spent in classrooms, studying the Qur’an. However, this is not actually the case. Many marabouts force their students to pay a fixed amount of money every day, so as a consequence, the children can stay on the street even for twelve straight hours. Not handing in enough money can result in corporal punishments. “When I was a beggar I saw things that made me feel sick: some talibés were hit until they bled, others ran away out of fear, ending up sleeping on the streets”, says Abdoulaye Diallo. After leaving the koranic school, he joined Issa Kouyate and the other volunteers who have been running La Maison de la Gare for eight years now.

The center takes its name from the old railway station and has become a reference point for many talibés. Those who have fled the daara can rest here for a night or two, until the personnel has spoken with their teachers, their families or with the relevant authorities in the city. Apart from finding a shelter, the young beggars can take a shower or wash their clothes. They can also receive first aid for small wounds or a cure for the most common diseases caused by the poor hygiene in the schools. “Our service is free of charge but all we can give is primary health care, the most serious cases must be referred to the local hospital”, explains Sow Anta Mbaye, one of the two nurses working in the small clinic. He has just disinfected a small cut on the forehead of one of the children and placing a plaster on it. The little talibé, who wears a Barcelona football shirt, says his name is Sidi Sarr, that he is ten years old and that he has been living in Saint Louis since 2013. It’s children like those which makes Sow Anta Mbaye want to help at the La Maison de la Gare every day after work. “They are the most vulnerable of children, sometimes I see 30 of them arriving in a day, almost all of them after 5 pm, when they are no longer begging”, she says.

The volunteers at the Maison, some of whom are themselves former talibés, however, don’t only care for the students’ primary needs. Another building in the center hosts three classrooms, where basic courses of maths, French and English are held. English lessons have proven to be very useful since among the talibés coming from abroad, many are from the former British colony of Gambia.

The detail shows how widespread the phenomenon is and how the best strategy to deal with it is not by eliminating it but rather by bringing it back to its original spirit, the same mentioned in the Qur’an. “As the Bible does, the holy book of Islam encourages to help one’s neighbor, in a society there will always be the rich and the poor and the latter will need the former’s help”, Issa Kouyate explains, “so begging, if you attend a daara or if you are in front of a place of worship, is allowed. What is forbidden is the exploitation of children”. To avoid this, the help of the marabouts is needed: that’s why La Maison de la Gare involves them, together with local authorities and other civil society actors in seminars on the rights of the child. The compliant teachers are also consulted, together with the children’s families, when key choices for their pupils are at stake, such as entering formal schooling or one of the several vocational training programmes organised by the center.

Depending on their own choice, those who abandon koranic studies can become barbers, carpenters, mechanics, or farmers and gardeners. This is the case of Abdoulaye Diallo, who doesn’t only work at the center, but also in the fields, with three other former talibés. He arrived at the Maison in 2015 thanks to a volunteer, when he was still following the lessons of his marabout. “He was a good teacher, he didn’t ask for a fixed amount of money, just for what each one of us felt he could afford. I didn’t have any problem in telling him that I was leaving school, something I did out of my desire to help talibés and fight those who abuse them”. This is a commitment he hopes to fulfill through his work, and to be an good example for other former beggars, so that they could begin projects like those of Maison de La Gare elsewhere in Senegal.

PreviousIndia: The Healing Path Of Yoga
NextTrinidad and Tobago: Shango, Sticking To Roots