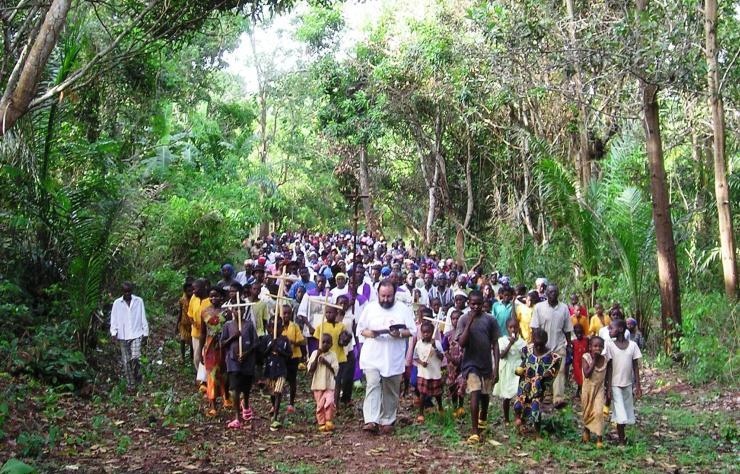 This year the Comboni Missionaries celebrate 50 years of presence in Central African Republic (CAR). Since the very beginning, their priorities have been evangelisation, the promotion of justice and peace, inter-religious dialogue and the formation of pastoral agents.

The arrival of the Comboni Missionaries in CAR relates back to the events that occurred in Sudan in the years between 1955 and 1965. The spiral of violence between the Muslim Arabs in the north of the country and the Christian and animist black population in the south during the 60’s, caused the flight of many Sudanese people to neighbouring countries. On the 27th February 1964, all Catholic and Protestant missionaries were expelled from Sudan, and among them were many Comboni Missionaries.

The majority of people who chose to go to CAR belonged to the Zande ethnic group and settled down in the territory of the newly created diocese of Bangassou, in the Central African Republic. For this reason, the Bishop of the diocese, Monsignor Antoine-Marie Maanicus, thought that the Comboni Missionaries were the most suitable to assist these people, since they knew the Zande language and were known by the Sudanese refugees. Three Comboni Missionaries arrived in Bangui in August 1966 and began their work in Bangassou. In September, the missionaries had settled down in Agbosi, which was the first Comboni mission in the Central African lands.

Refugees started to cultivate the fields, while several prayer centres were opened and the missionaries laid the foundations of the Catechumenate. However, the Central African Government’s pressures soon forced refugees to return to their own country, so out of 27,000 people who initially registered at the end of 1966, only 5,000 remained two years on. The works at the Mission of Agbosi continued until its closing in 1971, but the Comboni Missionaries continued to operate in many other places of the country and in other pastoral fields.

In March 1967, the Archbishop of Bangui, Joseph Cucherousset, entrusted the parish of Our Lady of Fatima to the Comboni Missionaries. This new community served as a point of reference for the new groups who had settled down in the country, the Mboki, Obo, Zemio, Tokoyo, Grimari, Mongoumba, Mbata and Dekoa. The first two Comboni Missionaries’ Sisters also arrived in 1967. Over the years and in collaboration with the Comboni Sisters, they have set up numerous health centres, training centres and schools and have also worked in radio stations, whilst carrying out their other missionary activities.

When the Comboni Missionaries arrived in the country, the Central African Church had already been committed to the evangelisation of the population for more than 70 years. In 1890, the current territory of CAR was part of the Apostolic Vicariate of Upper French Congo, with its headquarters in Brazzaville.

The Vicariate was entrusted to Monsignor Philippe Proper Augouard. This French Bishop, who belonged to the Holy Spirit Congregation, reached Bangui on the 13th June, 1893, rowing upriver on a canoe in the southern rivers of the region. The following year, he founded the Mission of Saint Paul of Rapids in Bangui, the first Catholic mission in Central Africa. In 1895, he founded the Saint Family of Bessou, 220 km to the north of Bangui. Later, other missions were founded and new missionaries arrived in the region. On the 8th May 1909, the Apostolic Vicariate of I’Oubangi-Chari was created, which incorporated approximately the current territory of the country.

The first African priest, Barthélemy Boganda, was ordained in 1938 while after 30 years, the first African Bishop, Monsignor Joachim N’Dayen was consecrated in 1968. Boganda would have become the first President, had he not died in a mysterious plane accident on 29th March 1959.

On the 10th June 1995, the Diocese of Mbaïki was created, with the Italian Comboni Missionary Rino Perinfirst as its first bishop. On the 3rd January 1998 another Comboni, the Spanish Juan José Aguirre, was appointed bishop of Bangassou replacing Bishop Antoine-Marie Maanicus, who had invited the Comboni Missionaries to work in CAR in 1966. Today, Central African Christians are more than 80 percent of the population, although only 36 percent are Catholic.

Since 2012, the Church has experienced a hard time, due to the rebellion of the mainly Muslim Seleka. Numerous structures of the Church have been looted and destroyed, while the spiral of revenge and hate has begun to tear the country apart. Many Christians joined the anti-Balaka militias in order to oppose the Seleka rebels, both using violence as their weapon. The result of the conflict has been a devastated country after three years of pseudo civil war.

Life expectancy has dropped below 40 years and 11.5 percent of children die before their fifth birthday. The violence of some lords of war, without faith and without law, still hits some areas, while the wounds at the heart of the Central African Republic, due to the clashes between the Seleka rebels and the anti-Balaka militias, are still open.

Last November, Pope Francis visited the country and made a plea for the nation’s fighting factions, both Christians and Muslims, to make peace. “To all those who make unjust use of the weapons of this world, I make this appeal: Lay down these instruments of death!”, he said at a Mass held in Bangui, the country’s capital.

While he was there, Pope Francis made a highly symbolic gesture by opening a ‘Holy Door’ at Bangui, ahead of the start of the Catholic Jubilee Year. He explained the significance of his gesture, stating that “Today, Bangui is the spiritual capital of the world. The Holy Year of Mercy begins earlier in this land that has suffered for many years as a result of war, hatred, misunderstanding and a lack of peace. This land of suffering is a reflection of all countries around the world that have experienced the cross of war. Bangui is the spiritual capital of prayer for God’s mercy. Let us all ask for peace, mercy, reconciliation, forgiveness and love. Let us ask for peace and reconciliation for Bangui, for the Central African Republic and for all countries afflicted by war!”.

Last November, at the age of 49, archbishop Dieudonné Nzapalainga of Bangui was named cardinal. He is the youngest in the College of Cardinals.

Today there are 35 missionaries working in CAR. They are from eight nationalities; they live in seven communities spread across five of the nine dioceses of the country and are responsible for five parishes and several centres of missionary animation and formation. The Comboni family also includes 12 Comboni Missionary sisters and 3 Comboni Lay Missionaries (CLM).

The first evangelisation, which is the proclamation of the Gospel to those who do not know it or only know partially know it, still remains one of the main priorities of the Comboni Missionaries after 50 years, as the commitment to the Aka pygmy people in the Mongoumba mission shows.

Given the country’s current circumstances, the promotion of justice and peace through inter-religious dialogue is the second priority and the formation of pastoral agents is the third priority. In addition to the catechetical centre of the Grimari Mission, which specialises in the formation of catechists from all corners of the country, there are specific similar programmes in each Comboni parish. The twelve Central African Comboni Missionaries are the visible results of this half-century presence in RCA.